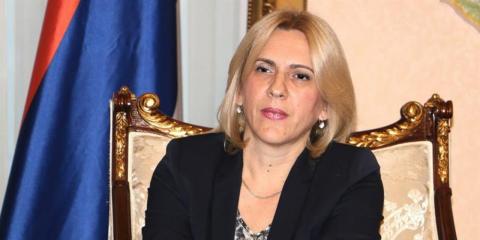 Republika Srpska president Zeljka Cvijanovic's decree saying that the Serb-dominated entity will not enforce a law imposed by Bosnia and Herzegovina's top international official banning the denial of genocide, if this incites hatred or violence, came into force on Wednesday.

The decree also says that the Republika Srpska authorities will not cooperate with Bosnia and Herzegovina's state-level institutions to implement the law, which was imposed in July by outgoing High Representative Valentin Inzko, the international official who oversees implementation of the peace deal that ended the 1992-95 Bosnian war.

The law also prohibits the denial of war crimes and crimes against humanity if this incites hatred or violence, and the glorification of war criminals.

Miodrag Stojanovic, a lawyer from Bijeljina in Republika Srpska, said it was unclear how the Republika Srpska authorities will react if asked by the state prosecution to provide assistance in a genocide denial case.

"If the Republika Srpska authorities say that the law is non-existent for them and in the future they receive an order from the prosecution or court of Bosnia and Herzegovina to apprehend or ensure the presence of a suspect or provide some pieces of evidence that are needed in court proceedings, I assume Republika Srpska will say, appreciating the fact that the law was abolished by this decree: 'We shall not comply with the order,'" Stojanovic said.