Taliban attacks in western Afghanistan killed 14 soldiers and policemen yesterday as Kabul residents prepared to bury their loved ones slain in a horrific bombing by Islamic State of Iraq and the Levant (ISIL) that targeted a voter registration center the day before, killing 57.

A suicide bomber blew himself up outside a voter registration center in the Afghan capital Kabul on April 22, killing at least 31 people and wounding dozens as they waited to receive identity cards, officials said.

Turkish authorities have deported a total of 6,846 undocumented Afghan migrants back to Kabul in recent weeks, state-run Anadolu Agency reported on April 16, basing the figure on a written statement from the Interior Ministry's General Directorate of Migration Management.

Turkey and Afghanistan might strike a blow against drug traffickers by struggling together against a "human trafficking mafia," which are both actually part of the same group, according to a Kabul diplomat, who has also called on Iran to join the efforts.

Preparing to head to Kabul, Pakistan's prime minister reiterated on April 5 his country's full support for Afghanistan's efforts to revive the long-stalled peace process with the Taliban.

Representatives from more than 20 countries gathered in the Uzbek capital Tashkent on Monday for an international conference on the future of Afghanistan.

A suicide bomber on Wednesday killed at least 26 people, many of them teenagers, in front of Kabul University, officials said, as Afghans took to the streets to celebrate the Persian new year holiday.

There was no immediate claim of responsibility for the deadly attack — the fifth suicide bombing in the Afghan capital in recent weeks — but the Taliban denied involvement on Twitter.

The attack seems to have been directed against the people gathered to pay tribute to Abdul Ali Mazari, a political leader of the Shiite minority of the Hizarreans killed by the Taliban in 1995, a deputy interior minister spokesman said. 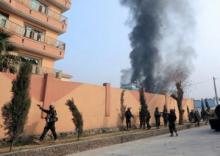 At least 29 people were killed in a total of four attacks in different locations in Afghanistan, local officials said.