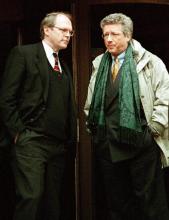 Ambassador Wolfgang Petritsch, the EU's Special Envoy for Kosovo (1998-1999), EU chief negotiator at the Kosovo peace talks in Rambouillet and Paris, was optimistic prior to this conflict, anticipating that the dialogue between Belgrade and Pristina would move forward in the second half of the year.

Kosovo-born photographer Asllan Krasniqi's images of the 1999 Rambouillet peace conference went on display at the National Library in Pristina on Tuesday at an exhibition staged to coincide with the 13th anniversary of Kosovo's declaration of independence.

After more than 20 years spent in Kosovo's political arena, President Hashim Thaci on Thursday announced that he will no longer be involved in politics once his mandate ends in April next year. 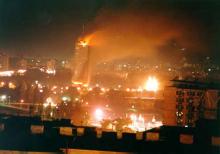 Today marks 18 years since the start of NATO's aerial attacks on the former Federal Republic of Yugoslavia (SRJ), consisting of Serbia and Montenegro.

BELGRADE - Serbia is on Tuesday marking the Remembrance Day for the victims of the NATO aggression that killed at least 2,500 and wounded around 10,000 people 16 years ago.

During the 78 days of air raids, 1,008 Yugoslav Forces soldiers and Serbian policemen were killed, as well as around 1,500 civilians, including 89 children.

BELGRADE - This Monday marks the 15th anniversary of the Military Technical Agreement known also as the Kumanovo Treaty, which was signed on June 9, 1999, ending NATO's 79-day long bombing campaign against the Federal Republic of Yugoslavia that killed at least 2,500 and injured more than 12,500 people.

BELGRADE - Serbia is on Monday marking the Remembrance Day for the victims of the NATO bombing campaign which killed around 3,000 and wounded around 12,000 people 15 years ago.

During the 78-day air raids, 1,008 Yugoslav Forces troops and Serbian policemen were killed, as well as around 1,500 civilians, including 89 children, while about a dozen people remain missing.