Turkey's Automobile Joint Venture Group (TOGG) has announced that it has successfully completed the initial body assembly of the country's first indigenous car on July 18.

"Our first body is assembled with all parts produced in our country," TOGG said on Twitter.

Turkey will own the intellectual and industrial property rights of its first indigenous car, the Turkish industry and technology minister said on Dec. 26.

The car prototype will be unveiled on Dec. 27 in the industrial province of Kocaeli, Mustafa Varank noted. 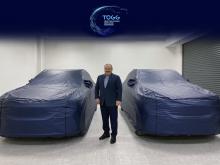 Turkey will unveil the prototype of its first indigenous car on Dec. 27, the nation's president said on Dec. 20.

The car publicity will be held in Gebze, a district of northwestern Kocaeli province, Erdoğan told reporters.