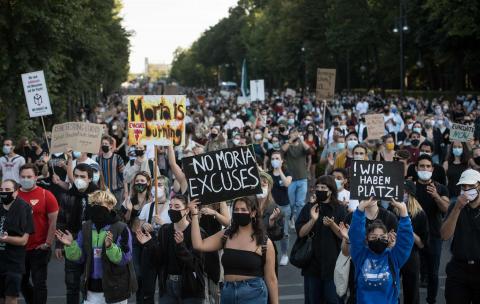 Thousands of people demonstrated on Sept. 20 in Berlin and other German cities, urging the European Union to take in migrants left without shelter after a fire destroyed their biggest camp in Greece.

The mask-clad protesters brandishing posters reading "Leave No One Behind" were joined in the German capital by the aunt of Alan Kurdi, the Syrian boy whose image became a tragic symbol of the 2015 refugee crisis after his body washed up on a Turkish beach.

"I decided to speak up and speak for those who can't speak for themselves... If I can't save my own family, then let's save the others," said Tima Kurdi, urging people to write to politicians to push for action.

"We can't close our eyes and turn our backs and walk away from them. People are people, no matter where we come from," she added.

Sonya Bobrik of the activist group Seebruecke also stressed that "we have space" to take in more than the 1,500 refugees now in Greece that Germany has so far promised to welcome.

Police said around 5,000 people turned up at the Berlin rally.

Similar gatherings were seen in Cologne, Munich and Leipzig.

In Paris, around 40 people carrying posters with slogans such as "No One Is Illegal" or "Asylum Is a Human Right" gathered to demand action.

"The situation in the camps is dire," said protester Nikolai Posner, adding that France is not doing enough to welcome migrants.

Some 12,700 people were left homeless after a ferocious blaze laid waste to their Moria camp on the Greek island of Lesbos last week.

Since then, roughly 9,000 have been resettled at a new temporary site.

But the destruction of Moria, a notoriously overcrowded and dirty camp, strengthened calls...