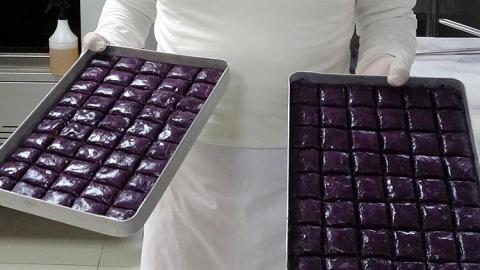 A confectionery in the capital Ankara has served purple baklava prepared with violet-colored fruits and vegetables, enticing traditional baklava lovers who got curious to know what's in it.
"At first, we had strong reactions. Some even asked if we were using food dye. But now even the traditionalists are its fan," said Kenan Taşçı, the manager of the confectionary, adding that it becomes difficult for us to keep up with the everyday demand.
Purple baklava is prepared with black carrot, pomegranate, cherry, blackberry and red beet.
"As the rate of the sugar in it is so low, it is preferable for those with diabetes," noted Taşçı.
Underlining that they do not use sweetener or glucose syrup inside the purple baklava, a food engineer at the facility, Betül Çelik Demiral, said, "We prepared it thinking of diabetic patients. Yes, some opposed the idea, but now it is the most consumed product."
Baklava is a classic Turkish dessert that comes in a variety of styles made in layers of filo pastry filled with chopped nuts and sweetened with sugar, honey or frosting, adding the perfect crunch to the layers and a delectable taste.
The word baklava was first attested in English in 1650, a borrowing from the Ottoman Empire.