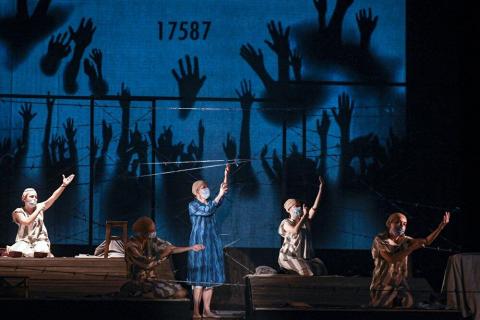 The latest première at the Jewish State Theater in the Romanian capital, Bucharest, explores the horrors of the Holocaust via a survivor's memories of the Auschwitz and Plaszow concentration camps.

Oct. 16's debut of "The Beautiful Days of My Youth" by Romanian Jewish Holocaust survivor Ana Novac follows the National Holocaust Remembrance Day commemorations on Oct. 9, the day when deportations of Romania's Jews and Roma began in 1941.

Some 280,000 Jews and 11,000 Roma were deported and killed under Romania's pro-Nazi regime during World War II. During the communist era, hundreds of thousands of Romanian Jews emigrated to Israel. The current Jewish population is around 6,000, down from 800,000 before the war.

The play premiered online and in front of spectators who took up less than a third of the seats because of measures meant to slow the coronavirus pandemic in the eastern European nation.

Maia Morgenstern, head of the Jewish State Theater and a Romanian Jewish actress best known for playing Mary in Mel Gibson's controversial 2004 movie "The Passion of the Christ," described the play's staging to The Associated Press as an "all-female project." The director is a woman, Liana Ceterchi.

"Each one of us is a facet of Ana Novac's soul and memory," Morgenstern said.

The play's author, born Zimra Harsanyi, hails from Romania's northern Transylvania region. She was deported at age 14. The diary she kept inside a Nazi concentration camp was first published in Hungary in 1966 and later translated into several languages, but it only hit bookshelves in her home country in 2004.

Many liken Kovac's work to that of Anne Frank, author of the "The Diary of a Young Girl," which documented her life in hiding in Nazi-occupied...