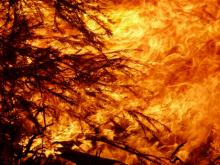 The Big Little actress shared a list of organizations that people can help with and wrote:

We love them from the movies they starred in or the songs they sang. But what did they do before they became famous?

1. Steve Buscemi was a firefighter

2. Harrison Ford was a carpenter

“Yassou” (Hello) wrote Aussie Hollywood superstar Hugh Jack Jackman in a selfie he shared with his 13.3 million Instagram followers. The 49-year-old family oriented actor, is on holidays enjoying the sun and culture of Greece with his wife Deborra-Lee Furness and their two children, Oscar, 17, and Ava, 11.

"La La Land," the Emma Stone-Ryan Gosling musical, which won six Oscars, has been racking up box office numbers that are remarkable for a musical - nearly $417 million globally so far, according to comScore - and even more for an original one with no previously known songs or story.

Penelope Cruz, Hugh Jackman, Catherine Deneuve, Richard Gere and Robert Pattinson are among the high-wattage stars due on the red carpet at the Berlin film festival, organizers said on Jan. 31 as they revealed the lineup.

The 67th Berlinale is the first major cinema showcase in Europe each year and presents nearly 400 productions from around the world.

After the postponement of his previously arranged shows due to health reasons, the Zorlu Center is once again bringing world-famous actor and singer Hugh Jackman to Istanbul for three exclusive performances on May 30, 31 and June 1.

Hollywood beloved star Hugh Jackman spoke to Who Magazine on his battle against skin cancer. He revealed that, in November of 2013, he discovered a drop of blood on his nose, which he thought was a self-inflicted injury with Wolverine’s prop claws, since he was shooting X-Men at the time.

Renowned Hollywood actor and musician Hugh Jackman will return to Istanbul for three shows on May 30, 31 and June 1 with his show, "An Evening with Hugh Jackman."

Hollywood actor and musician Hugh Jackman?s show ?An Evening with Hugh Jackman? in Istanbul has been canceled due to a hemorrhage in his vocal cords.

According to a statement from the actor?s doctor, ?smail Koçak, on March 18, the second leg of Jackman?s show has been canceled due to bleeding in the artist?s left vocal cord.