Bulgaria's President Rumen Radev said on 12th of November that resignations were not a decision but an escape. The head of state's comments came a day after protests in the country against fuel prices and the raising of the old car tax and third party liability insurance and demanding resignations . 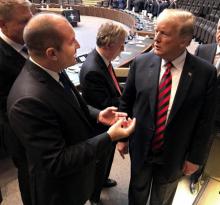 Bulgaria's Head of State Roumen Radev and US President Donald Trump talked during NATO budget discussions, the press office of the head of state said on 12th of July.

Bulgaria's President Roumen Radev enjoys the approval of the majority of the Bulgarians - 64.9%, followed by Ombudsman Maya Manolova - 60.4% and Sofia Mayor Yordanka Fandakova - 50.7%, results of a poll revelaed on 14th of December.

There has been no serious progress so far on the recommendations made by the European Commission in the latest CVM report, the comments by power-holders and opposition on it are divergent because the report itself is meandering, Bulgaria's President Roumen Radev said on 16th of November before the start of the official meeting at G. S.

EUR 260 million is the bilateral economic exchange between Bulgaria and Switzerland last year. This was announced at a press conference by President Rumen Radev after a meeting with the Swiss head of state Doris Leuthard, FOCUS reported.

The Consultative Council for National Security meeting on 17th of October did not reach agreement on the role and functions of the proposed new anti-corruption authority and the appointment of its Chairperson, Bulgaria's President Roumen Radev said after the end of the meeting, which lasted more than 4 hours.

"The project for the purchase of a new fighter aircraft for the needs of the Bulgarian Air Force should by no means be dropped," Bulgaria's President Roumen Radev said on 21st of August during a visit in Burgas, reported the Bulgarian National Television.

According to the head of State, MIG-29, no matter how good maneuverability it has, does not provide modern combat capabilities.

On July 18th, at 21.00, a solemn ceremony followed by fireworks display will take place at the Vasil Levski Square.It will be attended by Bulgaria's President Roumen Radev: Vice President Ilyiana Yotova and Deputy Chief of Defense, Lieutenant General Plamen Atanasov, according to BNT.