Serbian President Aleksandar Vucic condemned the Kosovo government's latest decision about licence plates for Serbs living in northern Kosovo, claiming its goal is "to expel Serbs, especially from the north of Kosovo and Metohija". He said Kosovo's goal was "to make a new Storm", referencing the Croatian army operation in 1995, codenamed Storm, that forced most Serbs to flee Croatia.

Those requests were brought to Belgrade by the EU special envoy Miroslav Lajcak, with whom Vucic met tonight in the building of the General Secretariat of the President of the Republic.
President of Serbia, Aleksandar Vui, said that as of today, we have a complete change in the situation in our country, as well as in the territory of Kosovo and Metohija.

Days after the European Union gave Slovak diplomat Miroslav Lajcak two more years in his post as EU envoy on the Kosovo-Serbia dialogue and Western Balkans issues, Lajcak has set spring 2024 as the deadline for when the two foes have to finally normalize their tense relations.

Dance professionals claim the lack of infrastructure and investment has halted their advancement, while the government pledges to fix the issues with the Minister of Culture, Hajrullah Ceku, promising a revolution in culture.

Upon president's arrival, the anthem of the Republic of Serbia was heard.

Kosovo police said they arrested Serbian citizen Nikola Nedeljkovic from Belgrade for "inciting hatred and discord" after a memorial service on Tuesday dedicated to the fighters of 1389 Battle of Kosovo.

The service was held at the Gazimestan monument near Kosovo's capital, Pristina. It coincides with the Serbian Orthodox religious holiday of Vidovdan (St. Vitus Day). 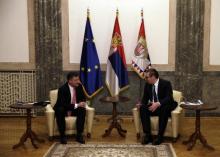 During the visit from June 29 to July 1, Lajk will meet with Serbian President Aleksandar Vucic, Serbian Parliament Speaker Ivica Dacic, as well as parliamentary opposition leaders and representatives of the international community in Serbia, the statement said.
Lajk is in Kosovo and Metohija today, where he arrived yesterday.

The Speaker of the Parliament of North Macedonia Talat Xhaferi did not put to the vote the proposal of the coordinator of the parliamentary group of VMRO-DPMNE Nikola Mitseski, who asked at yesterday's parliamentary session to consider the issue of negotiations with Sofia and the negotiating framework with the EU, BGNES reports.