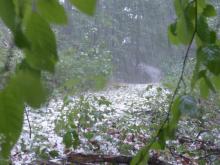 A hurricane wind with a speed of 100 kilometers per hour, accompanied by hail and rain, hit Sliven and the surrounding villages within 10 minutes at noon today. There are uprooted and broken trees, no injured people. Several villages are without electricity.

By decisions adopted at a meeting today, the Commission for Combating Corruption and Forfeiture of Illegally Acquired Property has initiated proceedings for establishing a conflict of interest with respect to six senior public officials under Art. 6 para. 1 of the anti-corruption law, said the Commission's press office quoted by Focus News Agency. These persons are:

The mayors of several municipalities and regional authorities took part in Kazanlak in the establishment of a tourism management organisation for the Rose Valley region, Sliven Municipality said, reports Focus News Agency.

According to data from the Bulgarian Academy of Sciences, the earthquake with magnitude 2.8 on the Richter was registered at about 20:00 last night.

A train went off the tracks between the Chumerna and Gavrailovo stations in Sliven Municipality, in the east of Bulgaria.

There were only goods wagons in the composition, and nobody was left injured, national carrier Bulgarian State Railways (BDZ) announced in a message.