According to "Sputnik", it seems that the U.S. team for the Balkans, which consists of Gabriel Escobar, the White House special representative for the Balkans, and Matthew Palmer, now in charge of electoral reform in Bosnia-Herzegovina, will get a third team member.

Turkey can strengthen its defense capabilities in whatever way it wishes, Turkish President Recep Tayyip Erdoğan told The New York Times in a story published on Sept. 29.

Speaking to the U.S. newspaper's editors at the Türkevi Center in New York last week, Erdoğan reiterated that Ankara has not undermined NATO or the Western alliance by purchasing Russia's S-400 missile system.

Turkey's president will hold a bilateral meeting with his U.S. counterpart as part of the upcoming G20 Leaders' Summit in Italy.

Recep Tayyip Erdoğan will meet with Joe Biden at the summit to be held on Oct. 30-31 in Rome, according to official sources.

As the interlocutors of the channel noted, the seizure of even a small number of weapons is of concern to the leadership of the United States.

Nearly 50 years after skyjacker D.B. Cooper vanished out the back of a Boeing 727 into freezing Northwest rain — wearing a business suit, a parachute and a pack with $200,000 in cash — a crime historian is conducting a dig on the banks of the Columbia River in Vancouver, Washington, in search of evidence.

The transformation of Alexandroupolis into a "new Souda" is perhaps the most basic change that can be expected after the completion of negotiations that are in full for the new amendment of the bilateral Mutual Defense Cooperation Agreement (MDCA). 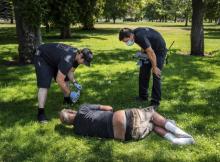 In Seattle and Portland, after several consecutive days of record high temperatures that exceeded 37.7, there was a relaxation on Tuesday, but the temperatures in the cities in eastern Oregon and the cities in Idaho increased a lot, reports AP.
42.2 degrees were measured in Spokane, Washington, which is the highest temperature ever recorded in that city. 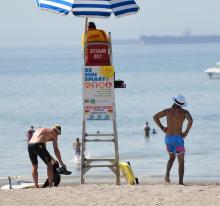 The health of North Korean leader Kim Jong Un has long been a source of morbid fascination in rival South Korea, which sits in the shadow of Kim's 1.2-million-strong army and his growing arsenal of nuclear-armed missiles.

Has he gained even more weight? Is he struggling for breath after relatively short walks? What about that cane? Why did he miss that important state anniversary?

President Joe Biden will on June 10 announce a "historic" U.S. donation of half a billion COVID-19 vaccine doses for 92 poorer countries, the White House said.