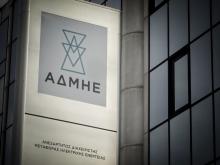 Greece's independent power transmission operator (ADMIE) reported revenues of 67.8 million euros in the first quarter of 2021, with after-tax profits of 8.2 million euros, with investments up by roughly 60 percent yoy.

The partial blackout in Attica and the Peloponnese on February 7 points to the urgent need to speed up investments in the power transmission and distribution networks that operate using equipment dating from the 1960s and 70s.

There has been no serious atmospheric burden as a result of the fire that broke out at a high-voltage power station in a suburb of Attica on Sunday night that led to power outages in Athens and Piraeus as well as areas of the Peloponnese peninsula, according to a team of Environment Ministry inspectors that visited the site on Monday.

Regions across Greece were hit by power cuts on Sunday night after a fire broke out at a high-voltage power station in a suburb of Athens, the fire brigade and officials at the country's power grid operator, ADMIE, said.

About 12 firefighters with four engines were battling the flames at the power station in Aspropyrgos, in the west of Athens.

Athinon Avenue gave up 7.36% over the month of January after another day of losses on Friday for the benchmark and the majority of stocks. The prospect of tighter restrictions and concerns over when the economy will start to recover continued to put pressure on prices.

Greek stocks staged a remarkable turnaround on Thursday, as they swapped losses for gains, boosted by the reversal of bank stocks' fortunes. This was mainly seen as a reaction to the recent decline of prices from the January 4 peak, and was implemented on the highest daily turnover so far this year.

The stock market's reaction after three days of losses proved half-hearted on Tuesday, as the early recovery was contained later on, with most bank stocks posting losses. Some traders will have decided to save some of their liquidity for the new 10-year bond issue, which Greece announced on Tuesday halfway through the trading session.

Greece was not affected, ADMIE stated, while the cause of the incident at 3.05 p.m. (Greek time) was unknown.

The Greek stock market reversed its morning losses to end the day with some gains in the face of a mixed picture in European markets due to the Brexit-related turbulence. Foreign portfolios continue to take an interest in local stocks - after the net inflow of 14.7 million euros last month - with blue chips rebounding and trading volume topping €150 million.