Montenegro's Police Directorate on Wednesday said that the arrest was part of a months-long international action initiated by Montenegrin, Serbian, Dutch and British law enforcement.

North Macedonia's Interior Minister, Nake Culev, on Thursday, said police seized a kilo of cocaine on Wednesday as part of an international drug-busting operation that had involved "several countries", while not naming them.

Costa Rica police seized the largest amount of drug in its history yesterday - 5 tonnes of cocaine hidden in a container of flowers that was to be loaded today in the port of Limon, on the Caribbean coast, France Press reported.

The drug was hidden in a shipment of flowers traveling to the Dutch port city of Rotterdam, the Interior Minister said.

Police on Friday evacuated a building on a central Athens street which, they said, had become a hangout for drug users and dealers.

Six people - five foreign nationals and a Greek woman - were arrested, while municipal cleaning crews removed 35 tons of garbage from the building on Liosion Street. 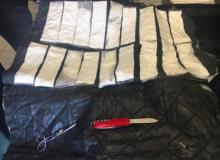 Spanish law enforcement has seized a submarine that was loaded with more than 2 tonnes of cocaine, according to the El Pais.

Law enforcement officers have detained at least two people. The submarine was discovered in the waters of Galicia. It is believed that the submarine has arrived from Colombia. There are no other details so far.

More than one tonne of cocaine in plastic packages of as yet unknown origin have been collected in recent weeks from the Atlantic coast of France, the French press reported.

Judging by a spate of drugs busts over the past 12 months, Balkan crime gangs are major players in the trafficking of heroin, cocaine, marijuana and synthetic drugs around the world.

Brazil is becoming a growing exporter, ahead of Colombia's largest producer. This became clear from announced customs data, BGNES reported.

So far this year, by September 25, authorities have seized 40.7 tonnes of cocaine at the Belgian port of Antwerp, the main entry point for drugs. Quarter of the seized drugs, 26 percent, came from Brazil, according to Belgian Customs Services.

Customs enforcement team in Turkey have seized 13.29 kilograms (29.29 pounds) of cocaine in an operation in Istanbul airport, the Trade Ministry said on Sept. 21.

The illicit drug was found in a warehouse, packed in four boxes, the Ministry of Interior and national Prosecutor's Office said in a joint statement.