The European Commission has proposed the inclusion of a new category in the map of Europe, which identifies the varying degrees of coronavirus spread. It will be colored in dark red, that is, it will indicate areas where the infection spreads especially quickly. 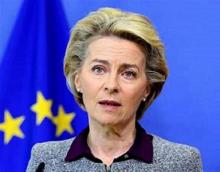 European Union leaders agreed that borders should remain open and assessed more measures to counter the spread of coronavirus variants during a video summit Thursday as the bloc's top disease control official said urgent action was needed to stave off a new wave of hospitalizations and deaths.

Turkey's top diplomat has called on the European Union to revitalize the accession process of his country to the EU, to launch the process for visa-free travel of Turkish nationals in the EU and start talks for upgrading the Customs Union agreement.

A diplomatic row has broken out between the UK and EU over the status of the bloc's ambassador in London.

The UK is refusing to give Joao Vale de Almeida the full diplomatic status that is granted to other ambassadors.

The Foreign Office is insisting he and his officials should not have the privileges and immunity afforded to diplomats under the Vienna Convention.

Turkey and the European Union were set to discuss the renewal of a 2016 migration agreement during a meeting late on Jan. 21, Foreign Minister Mevlüt Çavuşoğlu said ahead of the meeting.

The meeting, which will coincide with the launch of the 61st round of exploratory talks between Athens and Ankara in Istanbul, will take place on the sidelines of the EU's Foreign Affairs Council.

The Recovery and Resilience Facility is the best proof of the European Union's ability to learn from past lessons and deliver concrete and operational results despite the current crisis conditions," Finance Minister Alexandru Nazare told the meeting of the Economic and Financial Affairs Council (ECOFIN) on January 19, 2021.

IATA’s head sent an open letter to the EU

Ljubljana – Slovenian Finance Minister Andrej Šircelj expects that the first transfers from the EU’s recovery fund will be made during Portugal’s EU presidency in the first half of this year, as member states including Slovenia are rushing to ratify the legal basis and draw up national recovery plans.

Frontex notes that the number of detections of illegal border crossings along the EU’s external borders fell 13% last year to around 124,000