A joint statement by some European countries voiced on Nov. 11 "extreme concern" over Iran's latest move to restart enriching uranium at an underground facility.

Iran defended on Nov. 9 its decision to block an U.N. inspector from a nuclear site last week.

Iran has stepped up work at its underground Fordow nuclear facility, state TV reported on Nov. 6, a move France said showed for the first time that Tehran explicitly planned to quit a deal with world powers that curbed its atomic work.

Iran's president announced on Nov. 5 that Tehran will begin injecting uranium gas into 1,044 centrifuges, the latest step away from its nuclear deal with world powers since President Donald Trump withdrew from the accord over a year ago.

Iran's Supreme leader has ruled out the possibility of talks between Tehran and Washington. This happened the day before the 40th anniversary of the hostage drama at the US Embassy in the Iranian capital.

Turkey's state-owned Halkbank has denied any wrongdoing after U.S. prosecutors charged the lender with partaking in a scheme to evade U.S sanctions on Iran. 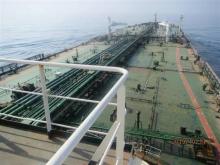 An Iranian government spokesman on Oct. 12 described as a "cowardly attack" an incident that Iranian media have called the apparent targeting by missiles of an Iranian-owned oil tanker, and said Iran would respond after the facts had been studied.

The United States offered to remove all sanctions on Iran in exchange for talks, Iranian President Hassan Rouhani said on Sept. 27 upon returning to Tehran from the United Nations General Assembly in New York, according to his official website.

On the sidelines of the UN General Assembly in New York, the three signatories to the agreement said that, in the event of new breaches of the agreement, they would launch a special dispute mechanism.
In that case, the entire nuclear deal would fail and the UN could re-impose sanctions on Iran.

France, Britain and Germany have blamed Iran for the attack in Saudi Arabia.