Slovenia has a rich underground world with caves large and small dotting the country. They have attracted cavers, visitors and researchers from near and afar for centuries, but also people who used them as a handy way to dump their waste. As a result, 20-30% of Slovenian caves are now thought to be polluted and cleaning them is a major challenge.

Professor Bojan Mohar from the Ljubljana Faculty of Mathematics has become the first Slovenian researcher to win the prestigious ERC Synergy Grant. He will be part of an international team researching the dynamics of karst watercourses and the occurrence of phenomena in extreme situations such as floods and droughts. 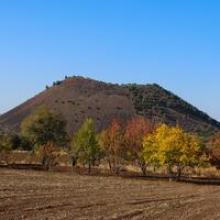 Located in the southern province of Mersin, the historical sinkholes, one of which is called "Heaven" with its 70-meter-deep green nature, and the other called "Hell" with its 128-meter-scary structure, are expecting to host 500,000 tourists in a year with their renewed look.

The number of sinkholes has risen substantially in a year due to the excessive use of groundwater for irrigation purposes in the Konya Plain in the central Turkish province, which is known as the "grain silo" of Turkey due to its vast wheat fields.

A passenger bus fell into a huge hole in the Chinese city of Xinhai, the capital of Qinghai province, according to the French Central Television.

At least 6 people have died. and The incident also wounded 16 people who are in a stable condition now.

A road section in front of a hospital on the busy Nandajie Street in the city of Xining, collapsed, 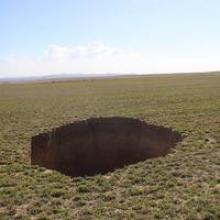 Three new sinkholes have been formed in the Central Anatolian province of Konya, raising fears among the locals. Click through for the story in photos...

French speleologist and diver Frederic Swierczynski is the first man in history who went to the bottom of Red Lake near Imotski and succeeded, writes The Dubrovnik Times, quoted by Focus News Agency. The dive was done yesterday and lasted for four hours.

The 420-meter deep doline, or sink hole, was among a number discovered by scientists during an eight-day expedition that began on February 26 in Donglan County. The dolines found in Guangxi are normally around 250 meters deep.