After ice bockets and the condom challenge, there’s a new craze taking Chinese social media by storm. It’s the challenge of true womanhood based on the premise that only a “real woman” can hold up a pen using her breasts.

Manny the cat loves to take selfies, or at least fondle GoPro cameras. According to Instagram user @yoremahm, Manny learned to use the camera by chance when it reached out to touch the camera during a shoot one day. Now, Manny’s selfies have become an Internet sensation.

Psychopaths tend to not feel guilt or remorse when being destructie, and they are unable to show sympathy and tend to dominate others. Though superficially charming and able to make a good first impression, they are self-centered, dishonest and undependable. The latest research has pinpointed 10 professions most likely to display psychopathic tendencies.

Who needs a press or publicity agent when selfies and social media now apparently reign supreme? Of course, you still have to have attained “celebrity status” in order to cause a PR sensation.

David Slater, a British wildlife photographer, has battled with animal rights grou PETA for ownership of a selfie that a mischevious macaque took with his camera. The animal welfare group is taking Slater to court, on behalf of the monkey, in order to give the primate ownership of the famous selfie. 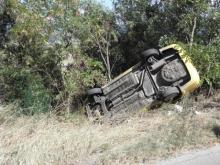 An attempt at taking a selfie was the likely reason for a car crash that claimed the lives of two teenagers, one of the survivors has said.

Four people were traveling in a car which tumbled over near the town of Sliven on Sunday. A 14-year-old girl and a 18-year-old boy, both in the back seats, died in the incident, while the driver, 18, is in hospital with a serious head injury.

Nary a day goes by without an article or news report appearing on how social media is slowly but surely transforming western society.
The latest “selfie” craze involves “divorce selfies”.
According to the Daily Mail, a Canadian couple commemorated the end of their marriage in a very unique way – by snapping a selfie.

Sometimes (unfortunately more often nowadays) words seem redundant… Don’t throw away your supermarket plastic bags. No, we don’t mean you should use them to discard your rubbish at home. Put them on! Yes, that’s right, wear them, then take a picture of yourself and post it online! The new craze among teenagers in Taiwan is wearing a semi-transparent plastic bag and posting a selfie online!

The selfies fad is something a lot of people have got caught up in. It’s fun to snap yourself at memorable moments. Sometimes we fail to control the environment we ‘selfie’ ourselves in or simply misjudge the time or place. Here are some funny and awkward selfies the creators might have second thoughts about:

1. When your kid walks in

Two recent studies linked to an increasing body of research shows that people who post selfies on social networks are more likely to exhibit what some psychologists call “the dark triad”.