"I thought it was impossible to have a worse meeting than the previous one, but today I was convinced that it was possible. We received EU proposals that were harmonized with our main negotiators. Serbia also fully agreed with what the EU proposed," Vucic said initially and added: 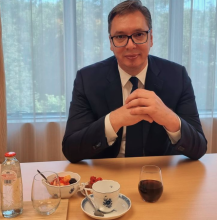 Kurti claims that the first genocide took place in 1878, and the last one in 1999. President of Serbia, Aleksandar Vui, responded fiercely.
By the way, the atmosphere at the negotiations is very tense, and the new round of dialogue continued even after the provocations, it is expected to end by 5 p.m.

The Covid-19 epidemic also worked out for Vucic, he did not deliver the awards to the laureates at the same time, but in smaller groups and on different days. Thus, TV viewers in Serbia could watch the soap opera "The President Presents the Order" for weeks.

Two Serbian NGOs, the Coalition against Environmental Corruption and the Podrinje Anti-Corruption Team, PAKT, on Tuesday said they had filed charges against Rio Sava Exploration and China Communications and Construction, CCCC, and their subcontractors, for environmental pollution. 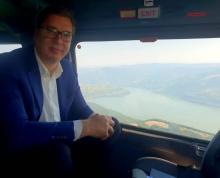 He posted a photo of himself traveling to that place on his Instagram account.
"On the way to Kladovo. Serbia is beautiful, and the Danube is its pearl. New investments are coming to the east of our country. Serbia is winning!", reads the description of the photo.

This was said today by the Minister of Innovation and Technological Development, Nenad Popovi.
"This is a historic moment for Serbia. As a result of our excellent political relations, new perspectives have opened up for the development of our economic ties, which are of key importance for our country, economy and citizens," Popovic told the Russian Agency TASS.

As Tanjug has learned, it will be announced at the ceremony on the occasion of the Day of the Municipality of Zvean, and the director of the Office for KIM, Petar Petkovi, will receive the plaque and the key to the city of Zvean on behalf of President Vui.

The busiest roads lead from Hungary and Croatia to Macedonia and Bulgaria.
Apart from highways, the intensity of traffic has also increased on the routes leading to Montenegro, AMSS announced earlier.