Interior Minister Lucian Bode said on Friday, during his visit to Bihor County, that those people who assumed the participation in the metro protest, even as a spontaneous labor conflict, will pay before the law because the provisions in force oblige to ensuring at least one third of the transport capacity. "The law is law for everyone. 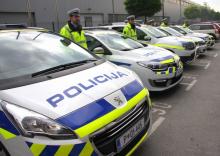 Ljubljana – One of Slovenia’s two police trade unions, whose members have been on strike since 11 January, has announced it is stepping up the action with a three hour work-to-rule at various locations across the country on Friday.

The unions representing journalists and other employees working in public and private television channels, as well as the state-run news agency held a strike on Tuesday to protest changes to work relations sin the media.

A court of first instance on Monday banned the labor action announced by the union representing employees in tax offices over extended working hours, saying it was illegal.

Civil servants in Greece have walked off the job in a 24-hour strike expected to disrupt public transport and services, on a variety of demands, including better workplace protections against the coronavirus.

Athens commuters will be without metro and ISAP electric railway services on Thursday, as workers at the fixed-track transport operator STASY joined a 24-hour strike announced by Greece's umbrella civil servants' union ADEDY, demanding protective measures for employees and mass hirings in the health sector.

There will be no tram and metro services in Athens this Thursday after staff in STASY, the fixed-rail public transport organization, decided to join a 24-hour strike called by the Athens Labor Centre.

In an announcement, STASY employees said that they were "not willing to accept the use of the pandemic as a 'tool' for passing anti-labor legislation to trample decades of rights."

Workers at the fixed-track transport operator STASY on Monday announced a 24-hour strike that will leave Athens commuters without metro, ISAP electric railway and tram service on Thursday.

Trains and the suburban railway will not participate in a 24-hour strike of employees in public transport on Tuesday, called in protest at the government's social security bill.

The planned full-day strike in the tram, metro, ISAP railway, trolley or bus service is expected to cause major traffic in Athens.