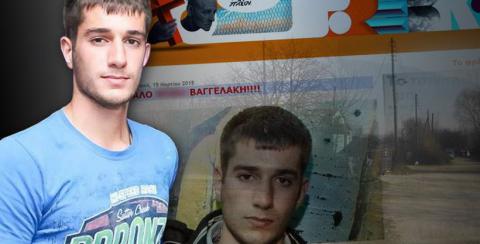 Maria Giakoumaki, the woman who flung herself onto her son's white coffin, is a tragic figure in the disappearance and consequent news of Vangelis Giakoumakis' suicide. She told Proto Thema of the difficult times she is going through and the pain of finding out about her son's suffering at the Dairy School of Ioannina. In Crete, her hometown, she feels that her son is near her.

"Vangelis still lives and will live forever in my heart, and I feel him near me. Even in this way, now that we've found him (dead), he is now with me. For such a long time we didn't know where he was. Nights and days passed by and we didn't know what had happened. We looked for our son and nobody told us anything," she says. "Yes, I believed until the last minute that we would find him even though the thought that something bad had happened to my son ran through my mind. I didn't, wouldn't allow myself to stop hoping."

She says that beyond her own loss she needs to keep the balances in the family with her husband and her other two children. "We are trying to understand what happened. The next day just rolls on? We have trust that justice will be done and for those who may have had something to do with this to be punished. We owe that to Vangelis," she says. "It isn't easy. My husband is in a very difficult condition. I don't know if he'll be able to handle all this. I'm struggling to be with him and my two children. What I want to remember are just good times with my child. He was really a good kid? He'll always be with me. We are and will be together every night when I hold his photo in my arms and we talk."

Three young people were identified by the Cyber Crime Squad as being amongst those responsible for cyber bullying. They were...