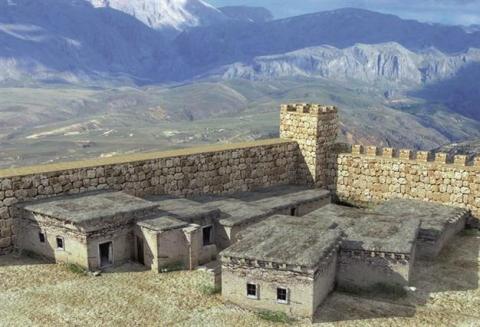 Excavation works carried out in the eastern province of Erzincan's Kemah district have unearthed a millennium-old Turkish neighborhood.

"We unearthed a nearly 1,000-year-old neighborhood dating back to the Turkic period," he added.

Excavations started in 2010 at the Kemah Castle in the Kemah district with the participation of Atatürk University's Yurtta?, Professor Haldun Özkan, Professor Süleyman Çi?dem, Assistant Professor Zerrin Kö?klü, academic Lütfü K?nd???l? and Gazi University's Nur?en Özkul F?nd?k as well as archaeology and art history students. The first findings were the Bey Mosque and a bath.

Yurtta? said unearthing a civil architecture like the one in Kemah, the capital of the Mengujekids, established after Turks settled in Anatolia, was important in terms of the history of Turkish settlement.  According to Yurtta?, ornaments found indicate that Bey Mosque dates back to the Mengujekids' era.

"By looking at Evliya Çelebi's 'Book of Travels,' we unearthed a structure called Bey Mosque. We also found the remnants of a bath next to the city walls of the castle. Then we wanted to learn about the civil architecture. 'There are some 600 houses inside the castle. One of these houses has a garden and others are adjacent to each other,' says Evliya Çelebi in his book. Considering this description, we started excavations in the northwest of the castle. We have been working in this field for nearly two years. We unearthed a 700-800-square-meter part. Just like Evliya Çelebi says, we...