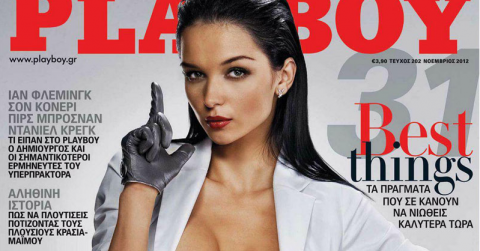 The first top tier Greek celebrity to pose naked for Playboy was late Zoe Laskari back in 1985 in a very artistic photo-shoot beside the ancient ruins on the island of Delos. She was 41 at the time and was reportedly paid 15 million drachmas to take her clothes off. Once she had taken the plunge, many famous Greek women followed, including big time cinema stars of who had reigned in the 60s, like Maro Kontou, Mary Chronopoulou Maria Ioannidou etc), as well as popular singers like Angela Dimitriou, Katerina Staniissi, Andzi Samiou etc and well known models and winners of beauty pageants (Isabella Darra, Noni Dounia, Niki Kartsona and others), even some who wanted to show off their new boob jobs like Ismini Kalesi and Konstantina Michail among others. Here is a quick list of some of the most famous ones that were on the iconic magazine’s cover.