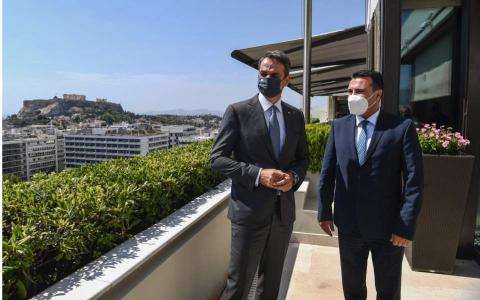 The development of economic cooperation between Greece and North Macedonia was the main issue discussed between Prime Ministers Kyriakos Mitsotakis and Zoran Zaev, respectively, in a meeting in Athens on Wednesday.

The two officials also focused on North Macedonia's the European perspective, while Zaev reiterated his government's commitment to the "good implementation" of the Prespa Agreement.

Zaev is in Athens to participate in an Economist conference.

Earlier in the day, Zaev met with President Katerina Sakellaropoulou, while later in the evening he will meet main opposition and SYRIZA leader Alexis Tsipras.