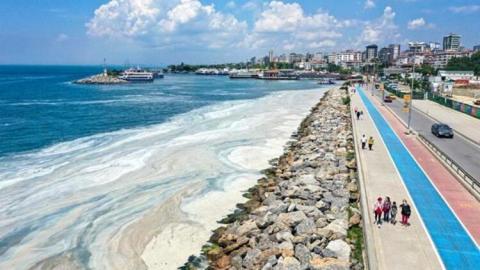 After weeks of meticulous efforts as part of a cleanup campaign to clear a mass of mucilage from the Marmara Sea, Turkish authorities are moving to a second phase in the fight against the jelly-like layer of slime that developed on the surface of the sea.

The Environment and Urbanization Ministry launched a study looking into how to decrease the impact of phosphates on the Marmara Sea.

"The use of cleaning products that contain phosphates and the active matter will be decreased. We will mandate the use of non-phosphate cleaning products at state institutions and organizations," said Eyüp Karahan, general manager of environmental management of the ministry.

"There are three main reasons for mucilage in the Marmara Sea: The stagnation of the sea, increasing temperature due to climate change and phosphor and nitrogen waste flowing into the Marmara Sea. The only thing we can work on within those three is the waste management of phosphates and nitrogen," the official said.

"What we aim in light of the Marmara Sea Action Plan is to monitor the detergent market, increase inspections and tighter regulations," Karahan added.

According to data given by Karahan, Turkish teams collected a total of 11,149 cubic meters of mucilage from the Marmara Sea in field works carried out with a team of 1,500 people over the past month.

However, experts noted that only the surface of the Marmara Sea has been cleared since the mucilage still remains at 20-30 meters below the surface.