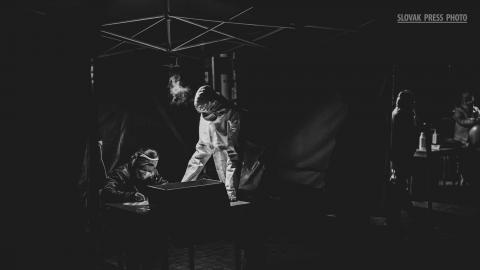 Tomáš Hrivňák, "It's just a test". COVID testing at a state theatre in Košice.

"We live in a strange time, we often can't tell who is good and who is bad, who is a cop and who is a criminal. These are the true heroes of our time though, the medical workers," said the author of the best reportage, Tomas Benedikovic, at the podium, with his finger pointing at a series of photographs from an ICU in Trencin hospital, Slovakia, where COVID patients fought for their lives.

Benedikovic was referring to the internal war going on in the Slovak criminal justice system, where different police units have been engaged in feuding during the past months over corruption persecutions of former political nominees.

COVID-19 dominated also the portrait category, with Richard Domos' series "Testing" capturing facial expressions of different subjects being tested for infection, in an environment of dynamic and artistic studio lighting.

As the photographer described his series of shots: "Regular testing became an almost daily reality for a long time. However, everyone was coping with it differently. Some people didn't mind it, some experienced extreme discomfort. That's why I asked a few of my friends to take a test while I captured their experience."

A few photographers managed to win an award with non-pandemic-related photographs too. To name a couple, Robert Barca covered the disaster after a tornado hit a South Moravian town of Hodonin, in the Czech Republic. And Hungarian photographer Simon Moricz-Sabjan won three...