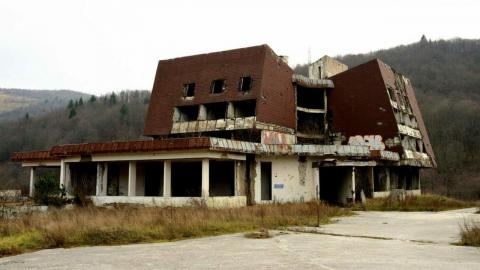 The Centre for Non-Violent Action said that activists from the Marking Unmarked Sites of Suffering campaign put up temporary memorial signs in November at eight unmarked sites where detainees were kept in inhumane conditions, mentally, physically and sexual abused, beaten and made to do forced labour during the war in Bosnia and Herzegovina.

The placing of the temporary signs in the Trnovo, Hadzici and Bugojno areas was part of continuing efforts by the campaigners to convince the authorities to install permanent memorials at places were people were detained, abused and killed.

In Trnovo, they marked the location of the abandoned Treskavica hotel in which around 100 Serb detainees, half of whom were women and children, were held during wartime, according to the Centre for Non-Violent Action.

Goran Timotija, president of the Organisation of Families of Captured and Killed Soldiers and Missing Civilians from Trnovo, says it is important for victims' families to know that there is an organisation marking the detention sites, irrespective of the religious and ethnic background of the people who were held there.

"When they mark a site, it means it becomes visible, that someone has empathy towards what happened there, that someone can come and light a candle, leave flowers and say a prayer for their loved ones," Timotija said.

The activists also marked the site of the former Mraziste hotel on Mount Igman in the Hadzici municipality, which was used for the detention of Serbs and Croats.

In Bugojno, they marked the site of the former Akvarijum motel, where 46 Bosniaks, including several women, were held in detention,...