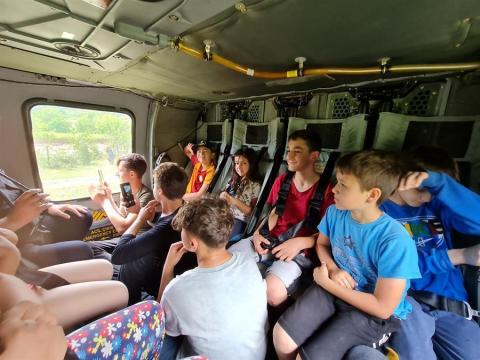 Interior Minister Süleyman Soylu, who visited Bartın, the northern province which was hit by floods the most among six Black Sea cities, to make inspections, has accepted the flood victim children's insistent demands to fly in a police helicopter.

Upon his arrival to the Şarköy district, children, who have never seen a helicopter for real before, surrounded the minister and asked if they could see inside and fly in the chopper.

Soylu did not reject the demands and gave the order to the pilot of the chopper. After the safety measures taken, child-ren flew over their district for a while and landed back.

The minister then visited Kastamonu and Düzce, two other northern districts devastated by the floods between June 25 and 27.

Thanking the State Meteorological Service for weather warnings and the "calamity early warning system" that informed the locals to flee from the disaster zones, the minister said, "We have two missing people, one from Düzce, the other from Kastamonu. Our search and rescue efforts are ongoing."

"Some 21,000 decares of agricultural lands are under water," he added.