A new clash broke out between Greek political leaders on Friday over a wave of sitins at schools, some of which have been staged in opposition to the government's name deal with the Former Yugoslav Republic of Macedonia.

"New Democracy was, is and will always be against any form of sitin," New Democracy leader Kyriakos Mitsotakis said in comments from Patra.

Conservative New Democracy leader Kyriakos Mitsotakis on Friday expressed his opposition to a wave of sitins at schools, some of which have been staged in opposition to the government's name deal with the Former Yugoslav Republic of Macedonia.

"New Democracy was, is and will always be against any form of sitin," Mitsotakis said in comments from Patra.

In a statement on Friday, Stelios Pappas, the head of the Thessaloniki Urban Transport Organization (OASTH) described the burglary of his home on Thursday night as an attempt to hamper efforts to liquidate the company.

The burglary, during which only a laptop was stolen, was "a targeted intervention," Pappas said in a statement.

The ruling Justice and Development Party (AKP) has submitted a 71-article omnibus bill, which introduces regulations over a wide ranging issues such as unemployment pay entitlement, old-age pensions, urban transformation, special consumption tax on certain items and house rents, to the office of the speaker of parliament.

Hungarian Prime Minister Viktor Orban said this during a visit to Prague on Friday.

"The position of Hungary is completely clear: we are a pro-Ukraine government, so we stand behind Ukraine," Orban said, responding to the press, Reuters has reported. 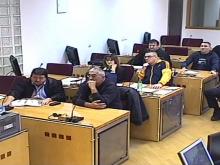 Former Bosnian Serb policemen Darko Mrdja and Zoran Babic were sentenced to 15 years in prison each for murders and other crimes against Bosniaks in the Prijedor area in 1992.

A little over BGN 3 million needed to complete the drinking water treatment plant in Sliven are provided in the budget program of the Ministry of Regional Development and Public Works for the period 2018 - 2020. This was announced by Minister Petya Avramova in her participation in the parliamentary control in response to a question of renewal of the construction of the facility.

During a joint press conference in Nicosia, Anastasiades said Cyprus respects Serbia's sovereignty and territorial integrity, as well as its path towards the EU.

Regular Business Surveys of the National Statistical Institute reported improvements in the business environment in the country in November, excluding construction. The overall business climate indicator increased by 0.6 percentage points compared to October, driven by improved business conditions in industry and retail. The indicator for the Services sector is unchanged.

The Blank Wall Gallery presents "City Scenes," a collaboration with the innovative photography app GuruShots. The show, which will only be up for a short period, comprises 40 printed photographs and 560 works that are being shown on a digital screen by photographers from different parts of the world who have captured candid moments in their respective cities.