The ruling centre-right National Liberal Party, PNL, went to the polls with its leader and then-prime minister, Ludovic Orban, as their choice to head the new government.

But the PNL's unexpected defeat on Sunday at the hands of the opposition Social Democratic Party, PSD, which won 29 per cent of the votes, 4 more per cent than the PNL, left Orban in a precarious position. 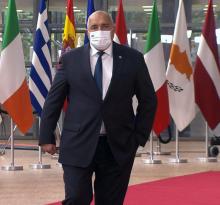 Prime Minister Boyko Borissov has arrived in Brussels to participate in the European Council meeting, which will take place today and tomorrow.

In the Belgian capital, European leaders will discuss member states' measures for coping with the COVID-19 pandemic.

President Klaus Iohannis said on Thursday in Brussels that Romania's decision to host the Cyber Center is "a real success" and the result of "very intense diplomatic efforts." "I would like to welcome the decision taken by the member states of the European Union regarding the location in Bucharest of the future European Cybersecurity Competence Center, the first European agency to be hosted by

Although Skopje appointed former Prime Minister Vlado Buchkovski as special representative in Sofia, Macedonian politicians themselves do not trust him, and this is evident from the fact that he has an assistant, the state secretary of the Ministry of Foreign Affairs.

After in-person discussions in Brussels that lasted hours, both sides said Wednesday evening that they remained far apart on key issues and a decision on the future of the talks would be made by the end of this weekend.

Romania will host, in Bucharest, the European Cybersecurity Industrial, Technology and Research Competence Centre - Cyber Centre, being the first EU structure to be based in our country, the Ministry of Foreign Affairs (MAE) announced on Thursday.

Turkish President Recep Tayyip Erdogan brushed off possible European Union sanctions against Turkey on Wednesday, saying they would not affect his country.

Speaking to reporters before departing for a visit to Azerbaijan, Erdogan also accused the EU of acting "dishonestly" toward Turkey and of failing to keep its promises.

The long-awaited meeting will take place "in the coming days", the leaders said after a telephone conversation that lasted more than an hour on Monday, December 7. That conversation followed after a tense morning in Brussels, Jutarnji list writes.