The United States is poised to sign a peace agreement with Taliban militants on Feb. 26 aimed at bringing an end to 18 years of bloodshed in Afghanistan and allowing U.S. troops to return home from America's longest war.

A man from Arkansas tried to blow up a car near the Pentagon building. He was arrested, the US Justice Department said.

The interior minister of Libya's UN-recognized Government of National Accord (GNA) said on Feb. 22 the government would not set obstacles for the U.S. if it sought to establish military bases in the country.

Russia and Turkey are on the verge of an armed conflict in the Syrian province of Idlib, according to US Department of Defense official Jonathan Hoffman. At the same time, the Pentagon hopes that direct confrontation and hostilities between the two countries in Syria will be avoided, EA Daily reports.

A senior official confirmed last year that Ukraine has made sufficient progress in fighting corruption to merit the release of $ 250 million from Congress by the Trump administration in a conflict with Russia-backed separatists in eastern Ukraine.

Nationalist Movement Party (MHP) leader Devlet Bahçeli on Feb. 18 stressed that coming up with rumors that a new coup attempt in Turkey was underway was a "betrayal to the country."

"If anyone considers a coup d'état, they would see the resistance of the 82 million of Turkey," he said, speaking at his party's parliamentary group meeting.

The US Department of Defense is transferring another $ 3.8 billion from procurement and other operations to the construction of a wall on the US-Mexican border, official documents sent to the US Congress showed Thursday, AFP reports.

The U.S. military on Feb. 10 disclosed a more than 50 percent jump in cases of traumatic brain injury stemming from Iran's missile attack on a base in Iraq last month, with the number of service members diagnosed climbing to over 100. 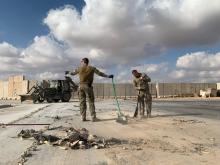 The United States resumed joint military operations with Iraq yesterday, interrupted after the assassination of Iranian General Qasem Soleimani in an U.S. airstrike in Baghdad in early January, according to the New York Times.