Western nations involved in the Kabul airlift began pulling out of the effort on Thursday, with a number of them citing the acute threat of a "highly lethal" terrorist attack by Islamic State, possibly within hours.

Croatian police told BIRN that a Police Academy student in Zagreb who "initiated and published the video" of fellow cadets dancing the Uzicko kolo, a traditional Serb folk dance, and who was also filmed dancing in her police uniform, has been expelled from the Academy.

European Internal Market Commissioner and head of the EC's vaccines task force, Thierry Breton, unveiled the first European "health passport" on Sunday, claiming he hopes Europe will have a summer season "comparable to last year". The new health certificate should be available "within two to three months" in both digital and paper formats, Breton told RTL radio and TV channel LCI.

Two years after the death of renowned French chef Paul Bocuse, the Michelin Guide has stripped his flagship restaurant of the coveted three-star ranking it held for half a century, prompting anger and dismay from his culinary peers.

"We respect the British. We ask them to allow us to go forward on our own path, and in the meantime we ask Britain not to export its political crisis over to the European Union," Loiseau told RTL radio.

The terrorist threat in France remains "very high," according to the Paris public prosecutor. He said the threat used to come from the outside, but is currently rooted "within" the country, making the fight against it even harder. 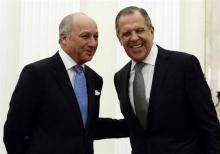 France's foreign minister said on Nov. 27 that troops loyal to Bashar al-Assad could be used to fight the Islamic State of Iraq and the Levant (ISIL) , but only in the framework of a political transition without the Syrian President, as France and Russia has agreed to coordinate strikes against ISIL.

Serbia's announced buying of Russian weapons has attracted attention in Croatia, while Interior Minister Rajko Ostojic has been asked to comment on the news.

He told the RTL television that his country is a NATO member, "and nobody will dare attack it."

Serbia's announced buying of Russian weapons has attracted attention in Croatia, while Interior Minister Rajko Ostojic has been asked to comment on the news.