A settlement for the Cyprus issue is "key" to the resolution of the tensions in the Mediterranean, according to Wendy Morton, the U.K.'s minister for European Neighbourhood.

Speaking during an interview with private broadcaster CNN Türk, Morton said that the U.K. supports a "comprehensive, fair and lasting" settlement to the Cyprus issue.

The letter points out, as he stated, the disastrous action of ad hoc courts.

Namely, it will happen if the UN General Assembly, which has 193 members, cannot agree on a new budget of six billion dollars, which would be valid until June 30, 2022.
Some diplomats blamed changes in negotiation procedures, logistics issues and difficult negotiations that oppose China to Western countries for the delay in reaching an agreement, Reuters reported.

The verdict in their trial will be announced at the UN court in The Hague on Wednesday.

According to the local media, she mixed the NATO flag with the United Nations insignia.
Gervalla changed the flags and changed the post, admitting that she made a mistake.

Looking back, 2010 was a crucial juncture in Greece-Israel relations.

"The persistence, I can say, and the stubbornness with which the West is introducing its 'rules' is astonishing. It is clear that there is a domestic political context - we need to show voters that they are cool guys in foreign policy towards 'authoritarian opponents' ahead of another election cycle (they are in the US every two years, they should succeed)," Lavrov said. 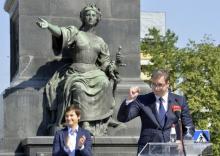 Today, Kruevac marks Vidovdan and the 650th anniversary of the founding of the city, and Vui previously laid a wreath on the Monument to Kosovo Heroes on that occasion.

"Milosevic's men on the ground" was the most common description of these two leading Serbian state security officials - Jovica Stanisic, chief of the interior ministry's State Security Service and his right-hand man, Franko 'Frenki' Simatovic, commander of the service's Special Operations Unit.