The appeals chamber of Mechanism for International Criminal Tribunals has scheduled Ratko Mladic's appeal for March 17 next year, as the former Bosnian Serb military commander challenges the first-instance verdict sentencing him to life imprisonment.

The Bosnian state prosecution on Friday charged Milan Lukic, the wartime leader of the Avengers paramilitary group, with crimes against 20 passengers who were abducted from a train at Strpci station near Visegrad in eastern Bosnia in February 1993 and then murdered.

The appeals chamber of the Bosnian state court on Thursday quashed the first-instance verdict that sentenced Bosnian Serb ex-soldier Boro Milojica to eight years in prison for crimes against humanity in the Prijedor area and acquitted his fellow ex-serviceman Zelisav Rivic, and ordered a new trial.

The Bosnian state court on Thursday partially upheld an appeal from former policeman Kahro Vejzovic and cut his sentence from six years in prison to four years.

Vejzovic was convicted of torturing captured Serb civilians in the village of Stupari during wartime between June and September 1992.

The Bosnian state prosecution filed an indictment on Wednesday accusing Malko Koroman of committing a crime against humanity against several dozen Bosniak civilians who were unlawfully detained at the police Public Security Station in Pale and at a nearby gym, where they were abused, tortured and beaten.

Belgrade Higher Court on Friday sentenced Joja Plavanjac to 15 years in prison and Zdravko Narancic to seven years for their roles in the killings of 11 civilian detainees at a prison in Bosanska Krupa in Bosnia on August 3, 1992.

Plavanjac was convicted of killing the prisoners and Narancic of helping him.

Radovan Paprica and Slavko Ognjenovic pleaded not guilty at the Bosnian state court on Wednesday to crimes including rape and sexual abuse in the Foca area between early April 1992 and late March 1993.

"I plead not guilty to all charges. I shall prove that with substantiated evidence," Paprica said when asked by the court to enter his plea.

Witness Zeljko Markanovic, who was also a Bosnian Serb reservist policeman during wartime, told the trial of Milorad Jovanovic at Belgrade Higher Court on Monday that he did not see his colleagues beat up prisoners at the Simo Miljus Museum prison in Lusci Palanka in Bosnia's Sanski Most municipality in the summer of 1992.

The Bosnian state court in Sarajevo on Wednesday convicted Radomir Susnjar, alias Lalco, of involvement in wartime crimes in the Visegrad area in June 1992, including the murder of 26 civilians - one of them a two-day-old baby - who were locked inside a house that was then burned. 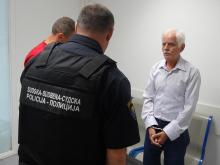 A Bosnian court on Oct. 30 sentenced a former Serb soldier to 20 years in prison for committing war crimes against Bosniak civilians during the 1992 Bosnian War.