A deputy enters the plenary hall before the new parliament's first session in Sofia on July 21, 2021. Photo: EPA-EFE/VASSIL DONEV

"The discussions are ongoing", political newcomer and proposed PM Plamen Nikolov said on Thursday, declining to give more specific information.

Bulgaria's winning party in the July elections, the political newcomer "There is Such a Nation", received a mandate to form a government from President Rumen Radev on Friday and proposed businessman Plamen Nikolov for its choice of Prime Minister.

With 137 votes for, one against and 99 abstained, Iva Miteva from ITN ("There Is Such a People") was elected President of the 46th National Assembly.

GERB was leading with 23.9 per cent while There's Such a Nation was a close second with 23.7 per cent. 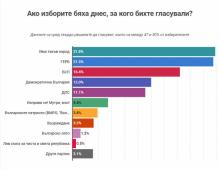 Six or seven political parties will enter the next Parliament, according to a survey by Alfa Research, the results of which were released on July 8.

It was conducted between July 4-7, among 1,013 adult Bulgarians across the country with own resources.

"There is such a People" has marginal lead with 21. 8% of the support.

Ultra-nationalist parties VMRO and the National Front for the Salvation of Bulgaria, along with populist Volya, have agreed to stand together in Bulgaria's July 11 2021 parliamentary elections under the name "Bulgarian Patriots", the parties announced on May 20.

There will be a broad left-wing coalition for the July 11 election. The negotiations are about to start with the ABB of Georgi Parvanov, "Movement 21" of Tatyana Doncheva and "Normal Bulgaria" of Georgi Kadiev, tomorrow the agreements will be signed.

Uncertainty is the only certainty in Bulgarian politics these days.

Since an inconclusive election on April 4, both the winner - long-time ruling party GERB - and the second-placed upstarts 'There's Such a Nation' have failed to cobble together a majority in parliament, meaning the baton will pass to the opposition Bulgarian Socialist Party, BSP.