Chairmen of the Presidency of Bosnia and Herzegovina

According to Dodik, this could include pulling Bosnian Serb soldiers out of Bosnia's joint armed forces and re-establishing Republika Srpska's own military, as well as withdrawing from the country's indirect taxation system. 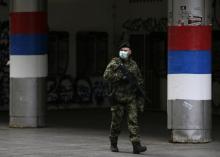 The Prosecution of Bosnia and Herzegovina charges Veljovic (1954) with committing the war crime of rape and sexual abuse as a member of the Army of Republika Srpska in 1992 in the area of Foca, the judicial institution announced.

Djordjevic was invited for a conversation by the chairman of the Presidency of Bosnia-Herzegovina, Zeljko Komsic, and the topic of the "emergency" meeting was to be the arrest of Edin Vranje, a BiH citizen who was arrested in Priboj on Sunday because the Serbian judiciary suspects him of war crimes in Gorazde.

Dodik reminded that the meeting will take place the day before the important visit of German Chancellor Angela Merkel to Serbia, when important regional issues will probably be discussed.
He pointed out that he respects Germany, that it is the most powerful economy in the world, the most politically important and leading EU country, RTRS reports.

He also told his Bosniak colleague Sefik Dzaferovic that he would watch him for a long time.

Turkish public broadcaster TRT reported that Erdogan will also open a mosque in Sarajevo's old town that was restored by Turkish General Directorate for Foundations.

The Turkish president on July 11 commemorated the 26th anniversary of the Srebrenica genocide, voicing his sorrow and sympathy to the victims.

In a video message at the memorial ceremony to mark the massacre's anniversary in Bosnia, President Recep Tayyip Erdoğan said Turkey will continue to stand with Bosnia and Herzegovina and Bosnians.