Istanbul had the biggest share with 24,286 units, according to official figures announced by the Turkish Statistical Institute (TÜİK).

Out of the 37 ranked cities chosen by the Time Out magazine, San Francisco made it to the top of the list and was followed by Amsterdam and Manchester, while Istanbul was listed 36th.

Copenhagen, New York and Montreal were also at the top of the list.

Offering rapid transportation compared to other means of transportation in Istanbul, a metropolis divided by the Bosphorus, sea taxis are preparing to set off in order to reduce the intercontinental transits of the city's residents to a more reasonable time.

In a bid to revive Istanbul's iconic Maiden's Tower, the Turkish Culture and Tourism Ministry has initiated a restoration project titled "The Maiden's Tower Opens Its Eyes Again." 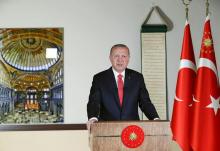 When in July, 2020 Turkish President Recep Tayyip Erdogan turned the Hagia Sofia Museum into to a mosque, he sparked an international outcry.

Over a year later, addressing members of his AKP party in Rize, Erdogan accused the opposition of trying to keep Hagia Sophia closed.

He immediately departed on a plane to Istanbul, the official source said

With students returning to the metropolitan city of Istanbul after spending a hefty amount of time in their hometowns due to the pandemic, apartment rental prices in the city are now on the rise.

New environmental projects for Istanbul are crucial as 76 percent of the pollution load of the Marmara Sea comes from the metropolis, the head of a parliamentary research commission examining mucilage that invaded the sea early in the summer has said.

Istanbul had the highest share with 26,716 house sales, according to official figures announced by the Turkish Statistical Institute (TÜİK). 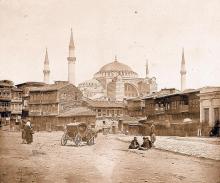 A prominent Turkish architect made a proposal to give the old names of Istanbul into some corners or regions of the metropolis to remind the inhabitants of the cultural and historical richness of the city.