Iran's oil minister on Tuesday criticised Greece and Italy for not buying its oil despite US waivers and said they had not offered Tehran any explanation for their decision. 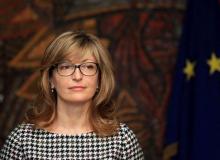 Iran's Revolutionary Guards confirmed on Aug. 5 it had held war games in the Gulf over the past several days, saying they were aimed at "confronting possible threats" by enemies, the state news state news agency IRNA reported.

Iran’s state-run IRNA news agency has reported that the Iranian authorities have recovered the “black box” from a Turkish private jet that crashed in the country while traveling from the United Arab Emirates to Istanbul on March 11, killing all 11 people onboard.

Turkish Interior Minister Süleyman Soylu will meet his Iranian counterpart Abdolreza Rahmani Fazli in Iran on Dec. 9, according to the ministry.

Iranian president Hassan Rouhani appointed two women vice-presidents on Aug. 9, but made no changes to an all-male list of cabinet ministers criticized by reformists for its lack of female representation.

Iranian President Hassan Rouhani put forward a new cabinet line-up on Aug. 8 that again included no women, despite criticism of their absence from his reformist allies.

There were no major changes to Rouhani's government, which is expected to continue his push for greater foreign investment and a technocratic approach to reviving the country's stagnant economy.

Iran's former President Mahmoud Ahmadinejad on April 12 stunned the country by unexpectedly filing to run in the May presidential election, contradicting a recommendation from the supreme leader to stay out of the race.

Former Iranian president Akbar Hashemi Rafsanjani, a pugnacious moderate who survived for decades despite challenging his own turbaned elite, died on Jan. 8 after suffering a heart attack.

Iran plans to revalue its rial tenfold and revert to the currency's old name, the toman, according to a bill approved on Dec. 7 by President Hassan Rouhani's cabinet, the official Islamic Republic News Agency (IRNA) has reported.

The currency was called the toman until the 1930s and most Iranians still refer to it by that name.