Finance Minister Christos Staikouras stated on Thursday  that the consequences of the global crisis will continue to affect Greece even though the state of the Greek economy will be better than in much of Europe during an interview given to the Parapolitika radio station.

Christos Staikouras was named Finance Minister of the Year 2023 for Europe by The Banker magazine of the Financial Times group, whose awards celebrate the officials that have best managed to stimulate growth and stabilize their economy.

Prudent fiscal management and the best use of available funds will allow Greece to face uncertain times effectively and achieve investment-grade status, which is the central national goal for 2023, Finance Minister Christos Staikouras has told the Athens-Macedonian News Agency (AMNA).

Main opposition SYRIZA-Progressive Alliance leader Alexis Tsipras, who has been invited to the swearing-in ceremony of the new president of Brazil, Luiz Inácio Lula da Silva, had a series of brief meetings and conversations with heads of state during his visit, party sources said on Monday. 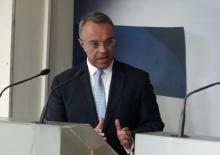 Finance Minister Christos Staikouras ruled out a Fuel Pass 3 subsidy, at this point in time.

Characteristically, Mr. Staikouras emphasized that according to the Eurogroup the reductions must be targeted and therefore there can be no horizontal reduction of taxes. The Minister noted  the Excise Tax also because it will mean 1 billion euros less.

Since 2016, the erstwhile strong and respected Great Britain had to change four prime ministers, and now it is looking for a fifth.

The case of Liz Truss, however, was beyond imagination. She remained in office for just 44 days, a shorter time span than the campaign in which she was elected Tory leader.

“We have images and videos”, said Notis Mitarakis who will see the president of the UNGA – “Turkey is in a difficult position” 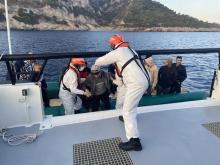 Turkish officials on Oct. 16 shot back at Greek allegations that Türkiye forced 92 naked migrants into Greece, calling it "fake news" and accusing Greece of the mistreatment.

Turkish Deputy Interior Minister has slammed Greek minister for his allegations about the country forcing 92 migrants to cross into Greece and stripping them naked before doing so.

"Since you could not find a single human rights case in Türkiye, you are trying to reveal the image of your persecution as if it happened in Türkiye," İsmail Çataklı said in a social media post.

The PM is answering the question submitted by Alexis Tsipras