Turkey on Nov. 20 brought seven Turkish citizens, who have been held upon baseless allegations for about two years in eastern Libya, as a result of the joint works of the National Intelligence Organization (MİT) with the Qatar Intelligence Agency (QSS).

Sedat Önal spoke at an International Conference on Libya in Paris that was co-chaired by France, Germany and Italy. He said it was very important that Libyans joined the group. 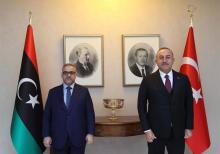 "Discussed current political situation and latest developments with Khaled al-Mishri, the president of High Council of State of Libya," Çavuşoğlu said on Twitter.

With Libyan presidential elections set for late December went there last week for a secret meeting. Could Israeli normalization with Libya be on the horizon?

Libya's presidential council suspended Foreign Minister Najla al-Mangoush from her duties on Nov. 6 days before an international conference is to make a new push to restore stability to the war-battered nation.

Turkey's top diplomat has reiterated its support to Libya and underlined that the upcoming elections slated for the end of this year should be held in a free, fair and credible manner.

The decision of the Libyan House of Representatives to withdraw the vote of confidence given to the National Unity Government at the session held in Tobruk on Sept. 21 will not contribute to the stability and transition process of Libya, the Foreign Ministry said.

A son of Libya's ousted leader Muammar Gaddafi has been released from prison in the capital Tripoli, security sources said on Sept. 5.

Al-Saadi Gaddafi, 48, was freed through a decision by the Libyan Chief Prosecutor's Office and the approval of Prime Minister Abdul Hamid Dbeibeh.

It was also stated that he left the country to move to Turkey.