The main opposition Republican People's Party (CHP) has called for the recreation of the Turkish Air Association (THK), a key aerial body tasked to fight forest fires, in a nationwide campaign with the participation of municipalities, the government and civil society.

A deputy enters the plenary hall before the new parliament's first session in Sofia on July 21, 2021. Photo: EPA-EFE/VASSIL DONEV

"The discussions are ongoing", political newcomer and proposed PM Plamen Nikolov said on Thursday, declining to give more specific information.

The municipal assembly of the northwestern province of Bolu has accepted Mayor Tanju Özcan's proposal to charge a tenfold fee for the water bills and solid waste taxes of foreigners, mostly directed towards refugees who have settled in the city after fleeing war in Syria.

Listing what needs to be done regarding the fires, Kılıçdaroğlu said, "We need to start preparing our country for new climate crises immediately."

GERB party will not support a cabinet proposed by the "There is such a people" party (ITN). This was announced by the leader of GERB Boyko Borissov in a live broadcast from the village of Gubesh near Sofia on his Facebook account. He accused President Rumen Radev for being the reason for the lack of dialogue between the parties. "We will come in from GERB and we will vote against. 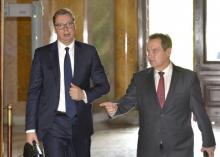 Vui was welcomed by the Speaker of the Parliament Ivica Dai.
Earlier, some representatives of the opposition came to the parliament, and among the first were the president of the DSS, Milos Jovanovic, and the deputy president of the SRS, Aleksandar Seselj, as well as the head of the SNS parliamentary group, Aleksandar Martinovic.

The scenario for early parliamentary elections is becoming increasingly feasible because of the hardening tone in the talks between "There is Such a People" and "Democratic Bulgaria". The prognosis is made by the political scientists Assoc. Prof. Antony Galabov and Assoc. Prof. Petar Cholakov.

"There is Such a People" party will present its draft cabinet to the leaders of BSP, "Democratic Bulgaria" and "Stand up. BG! We are Coming!". In a letter to media, Toshko Yordanov, chairman of the ITN parliamentary group, said he would invite the three political forces to meetings and present the linrup and structure of the cabinet, because "everything must be transparent."

Main opposition Republican People's Party (CHP) chair Kemal Kılıçdaroğlu on Aug. 2 reiterated that the Nation Alliance would determine the presidential candidate through democratic methods, stating that he will agree to run for the president if his allies want him to.