They were arrested last week for possessing 8kg of cocaine

A recent study from the University of Burgundy found that even though women smoke fewer cigarettes than men but they are less likely to quit.

Over half a ton of cocaine was discovered in banana boxes in a fruit and vegetable warehouse in Chiajna locality, Ilfov County, the market value of the drugs being around 25 million euro. 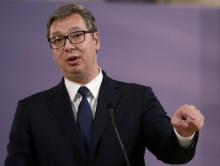 During the show, disturbing footage of the murder of Vlastimir Milosevic in March 27th Street in Belgrade at 6.50 a.m. was shown.
"This is a conflict between two clans, something that was imported to Serbia from Montenegro, this is a war between the Kavac and Skaljari clans," said Vucic.

In one operation, police in İpekyolu district of eastern Van province captured more than 265 kilos (584 pounds) of heroin and arrested two suspects on allegations of drug trafficking, according to a statement by the provincial police department.

Electronic cigarettes and novel tobacco products have been around for more than a decade as alternatives to cigarette smoking, which kills nearly 700,000 people in the EU every year. However, they remain a controversial issue and the EU is still hesitant about how to treat them legally.

The death toll from bootleg alcohol has risen to 12 in the northwestern province of Tekirdağ's Çorlu district, while seven people are still being treated in intensive care unit for alcohol poisoning.

Two more men, named Vedat Bektaş and Ahmet Ataman, died on July 5 of alcohol poisoning in Çorlu, an industrial town that has been hit by a string of deaths linked to bootleg liquor.

Port of Bar in Montenegro. Photo: Government of Montenegro

"Our international partners' reports have expressed concern over the large volume of illegal transit and illegal placing on the market of tobacco products on the territory of Montenegro. They also emphasize that activities in the Port of Bar indicate the existence of security risks," the government said.