Turkey has a long history of conducting extreme operations with its secret services. The most traumatic of these for us was against the Greek minority in Istanbul in September 1955. On August 21, 2013, it was accused of launching a deadly sarin gas attack on a Damascus suburb, killing hundreds.

The United States will dispatch two senior diplomats for talks with Turkish officials and to pay a visit to the Turkish southern provinces of Hatay and Gaziantep on the Syrian border amid the ongoing conflict between Turkey and the Syrian regime over Idlib province.

The United States dispatched two senior diplomats for talks with Turkish officials and to pay a visit to the Turkish southern provinces of Hatay and Gaziantep on the Syrian border amid the ongoing conflict between Turkey and the Syrian regime over Idlib province.

Government sources on Friday stressed that authorities are boosting security at the country's border following reports that Turkey will no longer stop Syrian refugees from traveling to Europe.

The Assad regime must fall back from Turkey's observation posts in northwestern Syria this month or Turkey will force the issue, said the Turkish president on Feb. 5.

"If the Syrian regime will not retreat from Turkish observation posts in Idlib in February, Turkey will be obliged to do so itself," Recep Tayyip Erdoğan told his party's lawmakers in parliament.

Turkey will continue to retaliate against attacks on its forces in Syria's northwest Idlib region, President Recep Tayyip Erdoğan said on Feb. 3, after six Turkish soldiers were killed and seven others were wounded in Syrian government shelling.

"Turkey has responded in kind to the attack in Idlib, and will continue to do so," Erdoğan told reporters before departing for Ukraine.

At least four Turkish soldiers were killed and nine others injured in intense shelling by Bashar al-Assad regime forces in northwestern Syria on Feb. 3, the Turkish Defense Ministry said. 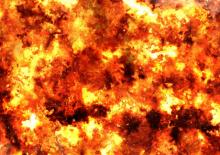 A car bomb exploded in the city of Tell Abiad, Syria, near the border with Turkey. At least 4 people were killed and dozens were injured.

Following the blast, roads leading to and from the city were closed by local authorities, while the seriously injured were taken to a hospital in the nearby Turkish city of Akcakale.

No terrorist group has yet claimed responsibility.

Russian and Turkish troops on Nov. 5 carried out a second joint patrol mission near the Syrian-Turkish border, the Turkish Defense Ministry said in a statement.