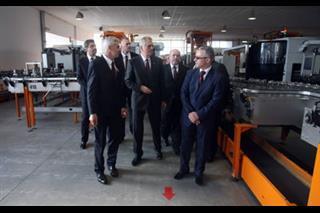 PARACIN - Serbian President Tomislav Nikolic stated on Monday that the government has special responsibilities to attract investments and create the conditions necessary for the implementation of reforms, especially in the judiciary and economy.

To ensure prompt exit from the crisis and better living standards for citizens, special attention should be attached to improvement of production as a basis for raising social wealth and a generator of the economic development which guarantees the country's economic independence and stability, Nikolic said after visiting the Serbian Glass Factory in Paracin.

He underscored that the factory was successfully privatised and added that this is a positive example which should be followed by other processing industries so as to achieve strong economic growth in Serbia.

Investments in the Paracin Glass Factory is one of the most important and most successfully realised Bulgarian investments in Serbia, Nikolic noted.

He said that after a century of operation, the factory is becoming a leader in glass packaging production once more.