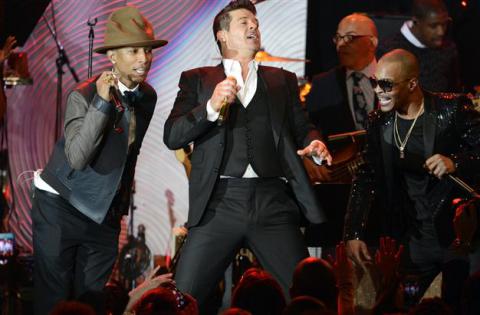 A US jury on March 10 ordered pop stars Robin Thicke and Pharrell Williams to pay more than $7 million in damages to Marvin Gaye's family, ruling the pair copied his music in writing their 2013 mega-hit "Blurred Lines."

The eight-member California panel, which had been deliberating since last week, found that the pop stars lifted parts of Gaye's 1977 hit "Got to Give It Up."

"I'm so filled with emotion that it's hard to get the words out," said Gaye's daughter Nona, hailing the "miracle" verdict.

The family took legal action "because he (Marvin) can't do it for himself," she added.

Gaye family lawyer Richard Busch said he plans to seek an injunction blocking future sales of "Blurred Lines," which was a worldwide hit.

Neither Williams nor Thicke, who had both testified during the trial, were in court to hear the verdict.

But a spokeswoman for Williams said: "While we respect the judicial process, we are extremely disappointed in the ruling made today, which sets a horrible precedent for music and creativity going forward.

"Pharrell created 'Blurred Lines' from his heart, mind and soul, and the song was not taken from anyone or anywhere else. We are reviewing the decision and considering our options," she added in a statement.

The Gaye heirs had sought a portion of the nearly $16.5 million in profits that the hit party song has reaped since its release two years ago.

Evidence presented in court suggested that Thicke and Williams each earned more than $5 million from the success of the record.