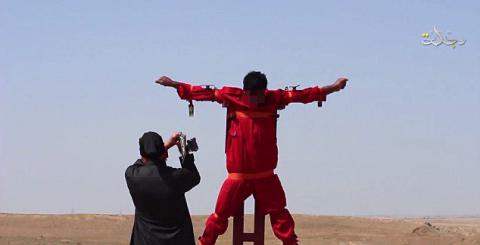 A new video by ISIS depicts their barbarous ways once more. The video is four minutes long and, according to Aymenn Jawad Al-Tamimi, a researcher of the Middle East Forum think tank, is the first in a series of a total of four executions of Iraqi “spies” by jihadists.

In the beginning of the video, a jihadist with a covered face states that there will be more executions to come. Afterwards, the “spy” wearing an orange uniform like the Guantanamo prisoners is bound to a cross, while the executioner cuts off his hands and feet with a cleaver. The video includes the victim’s cries, while the camera then zooms into the lifeless body of the man laying in the middle of the desert.

Before the video ends, the victim “confesses” to spying against ISIS.