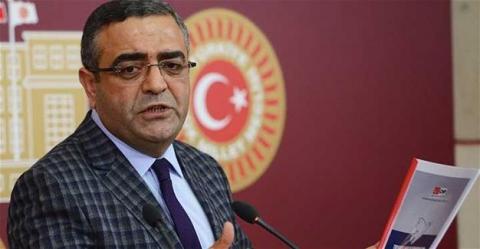 A public prosecutor in Diyarbakır has submitted a summary of proceeding for a main opposition lawmaker on terror charges, further increasing the number of Republican People's Party (CHP) deputies facing legal action.

"A public prosecutor in Diyarbakır has prepared a summary of proceeding about me on charges of 'being a member of a terrorist organization' and sent it to the parliament," CHP Istanbul deputy Sezgin Tanrıkulu said in a parliamentary speech on May 30.

Stating that the CHP has defended the principle of immunity for speeches under the roof of parliament, Tanrıkulu said no lawmakers could be prosecuted for what they say in parliament.

"There cannot be any cases or investigations in accordance with this principle of immunity. However, there are some hidden prosecutors who have given themselves a task," he said criticizing the ruling Justice and Development Party (AKP) for exerting influence over judicial bodies.

"I have been a lawyer in Diyarbakır for 25 years. I have presided over the Diyarbakır Bar. I am a founding member of the Human Rights Association, Human Rights Foundation and Amnesty International and have not been a member of a terrorist organization. However, during the five years of my lawmaker position … I have [allegedly] become a member of a [terrorist] organization during AKP rule," he said.

The legislative immunity of lawmakers was lifted by a constitutional amendment approved on May 20, 2016, with majority votes from the CHP, AKP and Nationalist Movement Party (MHP).

The amendment ruled that lawmakers who have a file at Justice Ministry, Prime Ministry and Parliamentary Speaker's Office for alleged crimes dated prior to May 20, 2016, would be exempt from constitutional article number 83,...