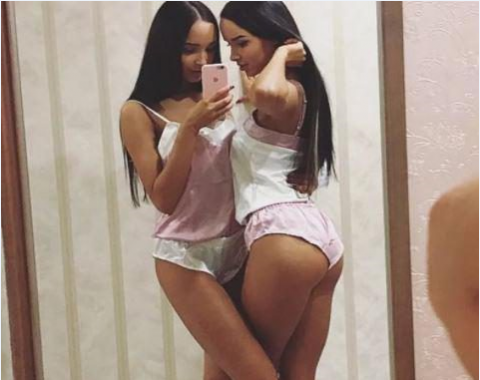 Saucy sisters Adel and Alina Fakhteeva say they want to find someone who will take them to the bright lights of Moscow because they are bored of their hometown.

And the busty brunettes say they don’t mind sharing their new hubby as long as they can “do everything together” – because that’s what they are used to.

The 22-year-olds, who are still at university, are minor celebs in their hometown of Kazan, central Russia, where they are known for their flirty fashion blogging.

The twins earn about 10,000 roubles (~£110) a month from advertising different brands, according to Russian media.

In one pic posted on Instagram the girls are seen cuddling up to each other in underwear and skimpy tops alongside the caption: “It’s cold outside, but it’s warm and cosy at home.”

Another shows them lying side by side in identical clothing as they look into their camera phone.

The snap is posted alongside the caption: “Cannot sleep.”

The girls created a minor scandal earlier this year when they appeared in a video with another blogger who lifted their skirts to reveal their bottoms.

Now they want to meet a multi-millionaire who can show them a better life.

But the twins have warned that their future hubby “cannot just be anyone”.

They said their new man has to be “disgustingly rich and open-minded” as “two wives is not normal”.

The girls reached out to local businessmen and politicians to assist them in their quest.

He told a stunned audience at a training seminar entitled “How to be the director of your own life” that he would be contacting people from Forbes’ list of Russia’s richest because he thought it would be “fun to help out”.