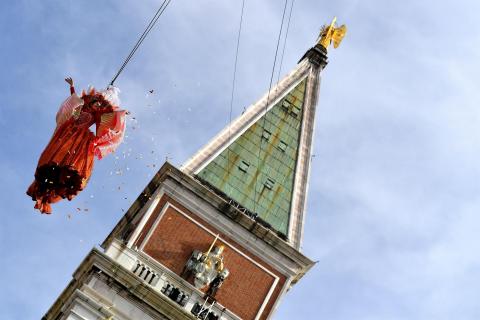 Thousands of people, many dressed for a traditional masked ball, crowded into Saint Mark's Square on Feb. 16 to witness "the flight of the angel", the opening event of the annual Venice Carnival.

Each first Sunday of the carnival, a young woman chosen as "Marie" has the honour of performing the stunt, gliding through the air on a harness attached to a cable from the 99-metre (325-foot) bell-tower of Saint Mark's Basilica to a stage below.

As she soars overhead, the angel tosses confetti at the onlookers below.

"This is pure energy, I feel the energy rise from my feet as if I'm floating on air," this year's angel Linda Pani told AFP-TV.

"It was extraordinary, I felt the wind, the sea, the ground and the fire in me," she added, describing the experience as "perhaps the happiest three minutes of my life".

The centuries-old Venice Carnival, rooted in Christian festivities ahead of the fasting period of Lent, attracts crowds of foreign and Italian tourists to its masked balls and theatrical performances.

The carnival, which lasts until February 25, was created in Venice in 1162, the day after a military victory.