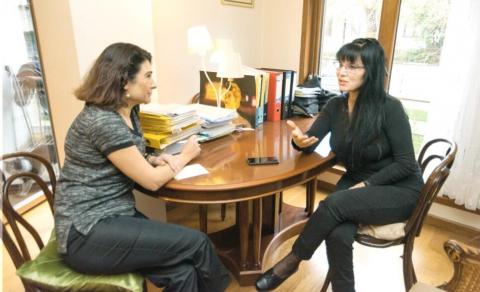 In every social contact, in every aspect of daily life, men act as if they own everything, according to a lawyer who is also a cartoonist, adding that men's body language "reflects a condescending attitude."
"Male narcissism has become a societal feature. This narcissism leads to behavioral disorders that can go as far as violence," said Meral Onat, one of the few woman cartoonists in Turkey. "Looking back at what we did [in the 1980s], I don't think today we would be able to publish any of those cartoons in the current circumstances."
How did you become a cartoonist?
I was 16, and someone told me about Gırgır [a famous weekly Turkish humor magazine that ran from 1972 to 1993] and said illustrators went to see [Gırgır founder] Oğuz Aral, who took a look at the drawings. I went there and saw hundreds of men waiting their turn. I think that's the first-time positive discrimination worked for me; someone informed Oğuz Aral that a small girl was downstairs waiting with everybody else. So I was taken upstairs, he took a look at my drawings and said come back tomorrow. When I went back the next day, I asked, "What am I going to do?" He said, "Sit down and draw." There was another woman cartoonist, Özden Öğrük; she had started a few month ago. She helped me, and even I was surprised to have come up with some cartoons. And as we were two, Oğuz Aral added a separate page for us in the magazine and we started drawing together. But then I won acceptance to the law faculty in Ankara and left Istanbul. There I became a "militant drawer."
What do you mean by that?
That was the second half of the 1970s [when political violence between the right and left hit a peak]. The death of a student each day had become routine. I was...